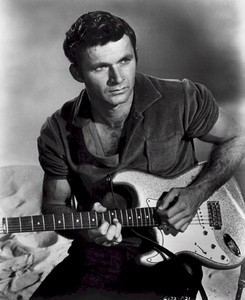 Richard Anthony Monsour (May 4, 1937 – March 16, 2019), known professionally as Dick Dale, was an American rock guitarist. He was a pioneer of surf music, drawing on Middle Eastern music scales and experimenting with reverberation. Dale was known as "The King of the Surf Guitar", which was the title given to his second studio album.

Dale worked closely with the manufacturer Fender to produce custom made amplifiers[1] including the first-ever 100-watt guitar amplifier.[2] He pushed the limits of electric amplification technology, helping to develop equipment that was capable of producing a louder guitar sound without sacrificing reliability.

FF-Deal-
I just wanted to let you know that I have created a special Premium upgrade offer just for you, which is a great deal and is a substantial saving compared to our normal pricing.

You can see the offer at the following link, but it's only available for a limited time:

If you wish to pay via PayPal, please use this link:

4 YEARS OF PROTECTION FOR $5

Cruising-Has Impact in Venice
This is the moment a huge cruise ship crashes into a tourist boat and the dockside in Venice, as dozens of people run away in panic

What this says to me is that there is a lot of money out there...at least for some. I see it in the grocery stores with prices that make me gasp. I had to beg my mom to get money to buy an inexpensive school cafeteria meal at lunch. We have come a long way.
Top

FROM ONE FRIEND TO ANOTHER...

FROM ONE FRIEND TO ANOTHER...

Written by Andy Rooney, a man who had the gift of saying so much with so few words.

Rooney has passed away but used to be on CBS's 60 Minutes TV show.

That having a child fall asleep in your arms is one of the most peaceful feelings in the world.

I've learned....
That being kind is more important than being right.

I've learned....
That you should never say no to a gift from a child.

That I can always pray for someone when I don't have the strength to help him in any other way.

I've learned....
That no matter how serious your life requires you to be, everyone needs a friend to act goofy with.

I've learned....
That sometimes all a person needs is a hand to hold and a heart to understand.

That simple walks with my father around the block on summer nights when I was a child did wonders for me as an adult.

That it's those small daily happenings that make life so spectacular.

That under everyone's hard shell is someone who wants to be appreciated and loved.

That to ignore the facts does not change the facts.

That when you plan to get even with someone, you are only letting that person continue to hurt you.

I've learned....
That love, not time, heals all wounds.

That the easiest way for me to grow as a person is to surround myself with people smarter than I am.

That everyone you meet deserves to be greeted with a smile.

That no one is perfect until you fall in love with them.

That opportunities are never lost; someone will take the ones you miss.

I've learned....
That when you harbour bitterness, happiness will dock elsewhere.

I've learned....
That I wish I could have told my Mom that I love her one more time before she passed away.

I've learned....
That one should keep his words both soft and tender, because tomorrow he may have to eat them.

I've learned....
That a smile is an inexpensive way to improve your looks.

I've learned....
That when your newly born grandchild holds your little finger in his little fist, you're hooked for life.

I've learned....
That everyone wants to live on top of the mountain, but all the happiness and growth occurs while you're climbing it.

I've learned....
That the less time I have to work with, the more things I get done.

To all of you....
Make sure you read all the way down to the last sentence.

It's National Friendship Week..Show your friends how much you care.

Send this to everyone you consider a FRIEND, even if it means sending it back to the person who sent it to you.

If it comes back to you, then you'll know you have a circle of friends.

HAPPY FRIENDSHIP WEEK TO YOU!

YOU ARE MY FRIEND AND I AM HONORED!
Top

Having a picture of yourself on top of Mt. Everest

Do you want impress your friends and family with the picture of yourself on top of Mt. Everest or just have a great prank for the next April Fool's Day, just go to this website and follow instructions.

If only it was in the summer. I hate cold weather....
Top

Sloths can hold their breath longer than dolphins.

Froot Loops are all the same flavor.
Top

Froot Loops are all the same flavor.[...]

With a name like Froot ..makes sense. What flavour are they...just fruity sweet? All Froot.


Sloths can hold their breath longer than dolphins.[...]

They are incredible swimmers. Using their patented sloth-y version of doggy paddle, they move through water up to three times faster than they move on land. They can slow their heart rate to one-third of its normal pace, allowing sloths to hold their breath underwater for up to 40 minutes.
Who knew
Top
Post Reply
344 posts