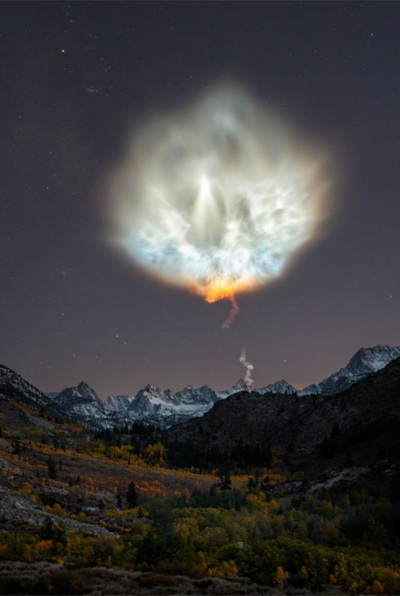 As last time the google translation to each picture.

No. 1
Fed up on the floe: the French polar photographer Florian Ledoux took this impressive aerial photograph of 20 crab-eaters who made themselves comfortable on the ice after their meal. Krill is mainly on the menu of the animals, which distinguishes this type of seal from all others. Crab eaters live in southern polar waters. The organization Nature TTL honored Ledoux for his drone photo as "Photographer of the Year 2020" - and at the same time made him a winner in the "Wildlife" category.

No. 2
Paul Holman took second place in the "Wildlife" category. He had submitted a photo of an owl on a window ledge, which had a special effect thanks to the flying jackdaw. When she starts to dive towards the window, Holman tries to capture the scene. "The frightened look on the face of the little owl gives the picture a little bit of humor," says the Briton.

No. 3
Eyes closed and through: This photo was taken by Terje Kolaas in Norway. It shows a Turkish pigeon in the middle of a snow flurry. "As soon as it stopped snowing, the bird shook off the snow and went on with its routine: collecting grain in the fields," says Kolaas. In order to catch the snowfall nicely, he tried many different shutter speeds. The halo of the dove was not created by the sun, it is a street lamp.

No. 4
Strolling between bluebells: Dave Hudson had actually observed an adult badger and wanted to take pictures. But then this cub appeared in front of his lens. "It seemed fine, so I hit the shutter button and took a few pictures."

No. 5
Now take a deep breath: In a forest in Romania, a brown bear warns an intruder with a deep hum. Bence Máté captured the moment - and even the animal's breath. "Breathtaking" is the title of the photo - and there is nothing to add.

No. 6
Tuscany in autumn light: Marek Biegalski took this picture of a flock of sheep that has set up perfectly in the shade of a tree.

No. 7
Everything in the flow: looks like airbrush, but is a lava landscape in Iceland. The drone photo, which captivates with its shapes and colors, was taken by Dipanjan Pal.

No. 8
It is obvious that Iceland was not only awarded once in the landscape category. The northern European island country is a popular destination for nature photographers like Alessandro Cantarelli. He has been there dozens of times in the past few years. Once everything came together near the Vestrahorn, a mountain in the east of the country: "To see such a sunrise was something magical," says Cantarelli. Heavy rain would have made photography difficult for him. "But it also came with a gift: a double rainbow." Using 88 layers in Photoshop, he then made this moment into this panoramic photo.

No. 9
Brandon Yoshizawa photographed the exhaust jet of a SpaceX rocket in the USA. "An incredible visualization of people and nature," he says. In the background you can see the snowy mountains of the Sierra Nevada.

No.10
Clouds of fog: Bart Heirweg took this impressive photo in the Scheldt Valley, a river that originated in France and flows into the North Sea near Antwerp.

No. 11
Saptarshi Gayen, who photographed this royal drongo in India, won in the "Under 16" category. At the end of winter, farmers would torch huge areas of grass to clean them for harvest, he says. This means that there are more insects in the air - fat prey for the birds.

No. 12
Water clouds: Hungary in winter, life rages in the soda lakes. Tamás Koncz-Bisztricz took this colorful photo of an unknown body of water hidden between the villages of Tömörkény and Pálmonostora. It is surrounded by reeds and reed grasses - insights: impossible. So Koncz-Bisztricz circled the drone and used a technique to get close to the action from a great height. It is a method that environmentalists also used to count birds, the photographer says.

No. 13
Burrow: Matej Borjancic took this photo in Slovenia of a young animal looking curiously through a crack.

No. 14
This macro shot of a small dragonfly looks like an ink drawing. Minghui Yuan took the photo in the Chinese Dabie Mountains.

No. 15
Camouflage look: Caitlin Henderson photographed this spider in the tropical north of Australia, a specimen of the genus Pandercetes gracilis. "An amazing species," says Henderson. The spider lives on trees and can adapt perfectly to the color and structure of the bark. The insects are hardly visible during the day. At night, equipped with a flashlight, it was easier because the eyes of the spiders reflected.

No. 16
With the help of a long exposure, Christian Wappl took this photo of a glow worm larva in Thailand.

No. 17
Twice as beautiful: insects are popular subjects in the "Macro" category. Robert Page discovered this pair of dragonflies in a park in London. He has been taking pictures at the pools for years, including in hot July 2019. "The dragonflies were sitting on the water surface in large numbers," says Page. He adjusted his attitudes and documented this moment of pairing.

No. 18
Home Sweet Home: Jesslyn Saw made a photo series of jumping spiders in Malaysia. Given the tropical heat, the best times to take pictures were early morning and late afternoon, Saw says. This spider had done it to her. She came back twice in the morning until she got this photo of the spider in her nest.

No. 19
A pink pelican in Jurong Park in Singapore grabs a fish. The photo is the winner in the "People's Choice Award" category.
Top
Post Reply
1 post • Page 1 of 1