Weren’t cryptocurrencies supposed to be the new gold, a form of ultrasafe, instantly transportable wealth that would free ordinary people from overzealous regulators, heavy-handed banks and inept national authorities?

These days, even the most ardent crypto-fan is beginning to see the merits of a heavier regulatory hand. The reasons aren’t hard to fathom. All over the world, crypto-institutions are proving to be astonishingly leaky vessels for holding wealth.

Read more: The crypto world is a dangerous place for ordinary investors, and regulators

In depth: A laptop, a sudden death and $180-million gone missing: Quadriga investors search for their cryptocurrency

Open this photo in gallery
Cryptocurrency entrepreneur Gerald Cotten addresses a conference in Toronto in March, 2015.

You can follow the rolling series of disasters on websites such as Blockchain Graveyard or Coindesk. In a year-end review on the latter site, Éric Larchevêque, the chief executive of security company Ledger, noted that “2018 was a record-breaking year. From the number of cryptocurrency exchange hacks, to the amount of assets that were stolen, to the largest exchange hack of all time, crypto set a lot of records.” He estimates an average of US$2.7-million was stolen from exchanges around the world every day during the year.

In some cases, the problems with crypto-exchanges may have less to do with hackers than with administrative incompetence. Here in Canada, QuadrigaCX, an exchange run by entrepreneur Gerald Cotten, has filed for relief from creditors after the 30-year-old Nova Scotia-based businessman died in December while in India to open an orphanage. He had apparently made a practice of keeping the exchange’s most important passwords to himself. In the absence of those keys, it’s not clear how to gain access to as much as $180-million in digital currency owed to Quadriga users.

The blow-up has raised a storm of inquiries from those who say the circumstances of his death were suspicious and question whether he is dead at all. His wife says he is and has railed against online commenters who have dared to suggest otherwise.

Related: A laptop, a sudden death and $180-million gone missing: Quadriga investors search for their cryptocurrency

That controversy will continue. But what is beyond debate is that the crypto-industry has done a spectacular job of setting itself up for such suspicions.

Early waves of crypto-enthusiasts flaunted their libertarian roots and their distaste for government intrusion. Bitcoin innovators, in particular, were proud of building a system that didn’t require trust in authorities. Instead, they relied on algorithms to achieve consensus. They engineered a system that was pseudonymous by design, with no central overseer to question or reverse suspicious transactions.

The problem with building such an edifice is that you just might succeed. When a deliberately pseudonymous, unregulated store of wealth goes awry, clouds of suspicion are sure to follow. Was it a hack? An inside job? Con artists weaselling passwords out of legitimate users? Or simply a tragic accident?

All of these are possibilities. But many observers will believe the worst because of the system’s built-in bias toward opacity.

To its credit, the crypto-industry has tried to shed more light on its operations, with initiatives ranging from self-regulation of exchanges to the invention of newer tokens with higher degrees of central oversight and different strategies for creating and tracking coins. But given the stream of crypto-thefts in recent months, it’s not obvious those efforts at self-help are having much effect.

This has led to calls for authorities to get more involved and monitor crypto-exchanges as regulators have already done, to some degree, in Japan and Australia. It’s not clear, though, whether that’s a winning solution. How can regulators give investors any guarantees about the sound operation of a technically complex industry dedicated to helping people making an end run around traditional money? And if authorities require crypto-holders to reveal more personal information, wouldn’t that destroy the pseudonymity that was originally vital to these tokens’ appeal?

Those are good questions. For now, anyone who wants to use a crypto-exchange should be fully aware they are investing in a business that lacks effective regulation and offers no easy remedies for disgruntled users. If that sounds too risky for your taste, the solution is simple: Don’t invest in crypto.
Top


It is more like 260 million at stake. I wonder if this guy is really alive.
Top

If you're using an ad blocker....Spotify.

If you're using an ad blocker....Spotify.

I tried using ad blockers but they didn't seem to make that much difference to me.
and sometimes I don't mind looking at ads.
Top

When downloading from movie and TV sites they are a must.ie the content that I post here.
Top

I remember years ago someone came out with those Neon Flashing ads and would hurt my eyes,
that's when I needed an ad blocker, but I have not seen those for a long time.
but they sure were annoying.
Top

You needed a Neon light Ad blocker of sorts...

That can't be!!!
Facebook would never lie to me.

has just launched a free website in Canada that is designed to help people get their complaints resolved. Resolver doesn’t actually investigate your complaint. Instead, it guides you through the complaint process for individual companies. The idea is to set expectations and reduce the gap between what the customer wants and what the company is likely to offer.
Resolver has been adding companies to its database and already includes banks, telecom companies, retail stores and restaurants. The website will explain your rights to you in making a complaint, help you document your complaint and create a case file for you.
Resolver works on the concept that companies want to address complaints and reduce the brand-damaging aspects of people airing their grievances on social media. Resolver generates revenue not from users, but from companies who buy the data it collects on complaint handling. It has no stake in any financial settlement you might receive.
Top 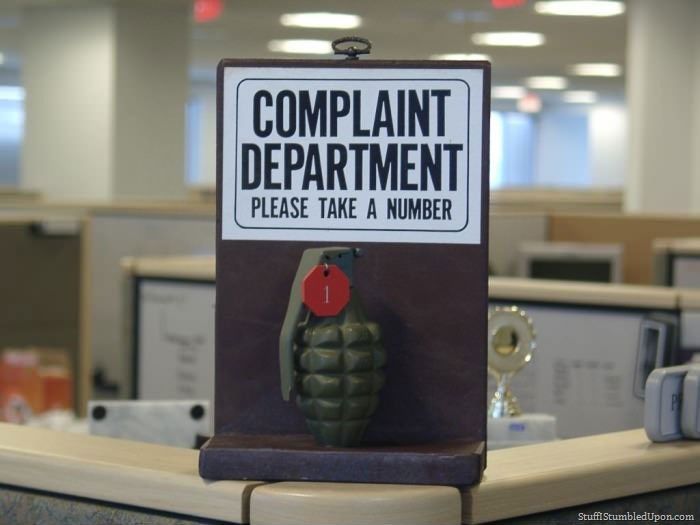 This must be the best Complaint-Resolver.

Very welcoming. I like it. I guess they have an easy job